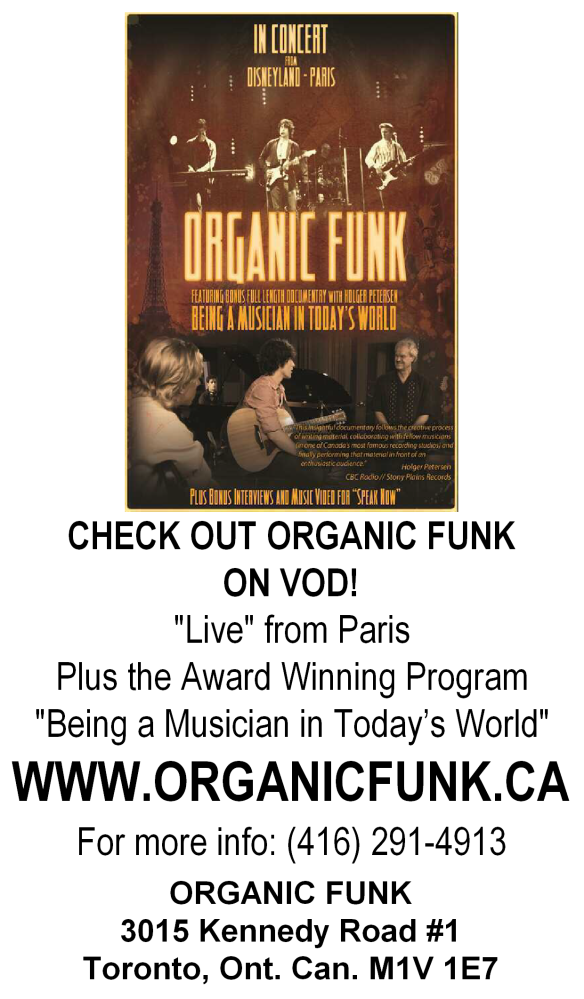 Being A Musician In Today’s World

Set against the backdrop of the band’s Disneyland Paris Concert, this one hour documentary special features the music of Michael Costantini and Organic Funk. During the band’s first European, their Paris concert was filmed in anticipation of producing a documentary feature that would recap the band’s years of development and to what lengths a Canadian musical group must go to make it in the Twenty-first Century. The documentary was filmed at the Legendary Phase One Recording Studios in Toronto and includes performances from their Paris concert, along with some in-studio recording as the band recounts the European Tour experience. Music fans get an inside look at why the band plays what they play and writes what they write.

The special Documentary Feature is hosted by Holger Peterson, the host of CBC’s “Saturday Night Blues”. Holger guides the audience through the bands journey thus far and the band shares some of their trade secrets when it comes to song writing, song selection and the pitfalls of staging not only an international tour but surviving in a business that is somewhat saturated with talent… that tends to blur the lines between the serious and novel, overlooking the minstrels of our time and the societal condition.

The documentary was Produced and Directed by Steve Thomson who among his other credits also produced and directed the award winning documentary “Let It Rock at The Crossroads of Rock’N’Roll”.

Toronto, Ontario, December 4, 2013 – Steve Thomson of Backstage Productions International is pleased to announce that the company’s most recent Documentary “Being a Musician in Today’s World”, has won a prestigious Accolade Award of Excellence in Two Categories for Documentary and Direction from The Accolade Competition. The awards were given to Backstage Productions for its exciting new Documentary, “Being A Musician In Today’s World”, which explores surviving in a business that is somewhat saturated with talent… that tends to blur the lines between the serious and novel, overlooking the minstrels of our time and the societal condition, all through the eyes of Toronto Band, Organic Funk.

Producer/Director Steve Thomson had this to say, “We are thrilled to have received the Accolades and on behalf of Tony Wannamaker (DOP, CSC), Sandy Coles & StoiQ (Editors), Michael Costantini and his band, Organic Funk and everyone who worked on and supported this production, we would like to thank the Accolade Competition for the recognition. We would particularly like to thank Holger Petersen for his contribution and everyone who helped to make this production a success. We hope musicians everywhere will benefit directly or indirectly from the story and music fans will come to appreciate more the challenges today’s musicians face particularly in our changing world and why we count on them to support creativity – after all, musicians are the minstrels of our time.”

The Accolade recognizes film, television, videography and new media professionals who demonstrate exceptional achievement in craft and creativity, and those who produce standout entertainment or contribute to profound social change. Entries are judged by highly qualified professionals in the film and television industry. Information about the Accolade and a list of recent winners can be found at http://www.theaccolade.net.

In winning an Accolade, Backstage Productions International joins the ranks of other high-profile winners of this internationally respected award. Thomas Baker, Ph.D., who chairs The Accolade, had this to say about the latest winners, “The Accolade is not an easy award to win. Entries are received from around the world. The Accolade helps set the standard for craft and creativity. The judges were pleased with the exceptionally high quality of entries. The goal of The Accolade is to help winners achieve the recognition they deserve.”

For more information contact Steve Thomson (416) 291-4913 or visit us at http://www.backstageproductions.com.

Here is a new dvd from ORGANIC FUNK.

The past year has been a very busy one for Organic Funk with a European Tour, several video releases, see it on YouTube at http://youtu.be/BDi02yF4sqE, and the production of a Documentary Presentation which will be released in the coming months. Look for the Trailer on our web site and on Social Media Networks. Steve Thomson, the Producer/Director of the program had this to say, “It is a timely piece and in addition to some of the great performances from the band’s Disneyland Paris concert and some very impressive re-enactments and studio performances, the host of the documentary, Music Historian & Broadcaster Holger Petersen, does a terrific job weaving the band and the audience through the process of what it takes to be a musician in today’s world. It is sure to be an eye opener for many upcoming artists who are seeking a career in music or anyone else who is intrigued by someone who aspires to the challenge”. This “Celebration of Music” was filmed at the Legendary Phase One Recording Studio in Toronto, Canada and at Disneyland Paris and we a certain that it will entertain, enlighten and be enjoyed by audiences everywhere. A DVD is also being scheduled for release and will include the full Paris Concert and also the Documentary Presentation with added bonus interviews.

You can follow us online and on the band’s website at www.organicfunk.ca. Chat with us at organicfunk.wordpress.com. “We really enjoy hearing from our friends and music fans and hope you will drop us a line. Jim, Alan, Shawn or I will be certain to respond…” Michael Costantini.

Organic Funk have been compared to “a pre-popular Maroon 5”. Their “Speak Now” CD has been embraced by radio with very encouraging comments… “There is something very pure and raw about them…” “They may be on to something…” “Definitely a winner…” “Absolutely love it…“ “Speak Now” features 10 great tracks described as “contemporary rock with a funky groove and a hint of retro”.